I’m happy to announce that I’ve joined the Board of Directors at the Institute for Justice Journalism. The Institute for Justice and Journalism is dedicated to strengthening journalism about social justice issues by providing trainings, and funding story projects. I first came in contact with IJJ through their Migrahack event held as part of Chicago’s National Day of Civic Hacking in 2013. 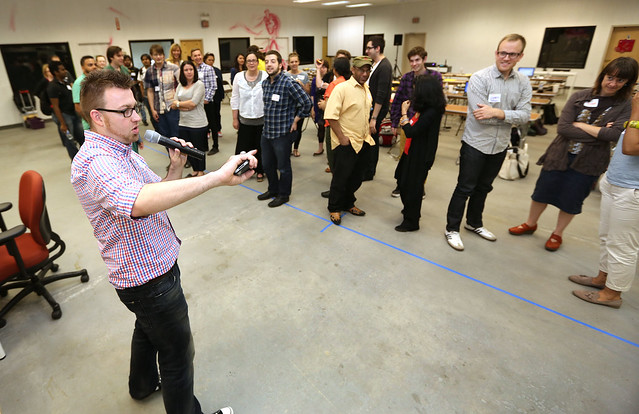 Since their event in Chicago, they’ve done Migrahack events in several other cities including events in Mexico City. Here’s a more in-depth look at their work.

You can find out more about IJJ on their website.

One of the things I do most often is introductions. I’m fortunate enough to be affiliated with a number of organizations including the Smart Chicago Collaborative, Code for America, and Chicago’s OpenGov Hack Night. As the Midwest Coordinator for the Brigade Program, I end up spending a lot of my time switchboarding.

I do a very similar function when I make an introduction. One person has a specific problem set. Another person has a potential solution. Make the connection. Connections lead to collaborations. Collaborations leads to wins. I call it switchboarding because it’s not always as simple as somebody coming up to me and going “Can you introduce me to Jessica Fletcher?” – but rather somebody saying what they’re about and me thinking through my contact list and going “OH! You should totally talk to that person!”

I’ll end up doing two styles of introductions. The first is when I know both parties well enough just to write a short note and send it off. I also do this when I’ve already made the introduction in person – and just want to have the intro be made digitally. However, most of the time what I’ll do what’s called a forwarding introduction. This isn’t my concept, it’s one I borrowed from @Roybarhat. The first step is me asking you to send me a short paragraph about who you are, what you’re about, and what you want.

Wait? Don’t you already know all that stuff?

A majority of the time, I do already know who you are and what you’re doing. However, when you send me that paragraph I’ll email the person I’m introducing you to and say, “Hey, here’s this person. They are awesome. They’re doing good work. Ya’ll should talk. Is it ok to introduce you?”

Having the paragraph be in your own words is useful because I might get it wrong. This also means that when I do introduce you, they already have all the background.

What else do you do?

The other thing I do is I include lots of links. If you’ve referenced your company or your website or your organization – I’ll provide a link to it. If the other party is interested, they’ll click the link and learn your background.

I also change the subject line, usually to something like ‘Awesome McAwesomepants, TotallyRad Inc <-> Baddie McBadAss, BigSoftie.org’. For this sort of thing, email works great. However, currently email gets used for all sorts of things and it makes the email inbox a mess. Creating a subject line like that tells somebody instantly what the email is and makes it easier to search for.

I’ll also include links to your Twitter and your LinkedIn Profile.

LinkedIn is a necessary evil. Nothing else really summarizes your professional career better than LinkedIn. And it’s something that most people already have. Now, there are some things LinkedIn could do to make it easier for me to do this. For example, to change their user interface back to where it defaulted to the custom message invite. Despite it’s flaws, LinkedIn is still the easiest thing for me link to when somebody wants to know who you are and what you’ve done professionally.

The exception to this is if both parties are prolific tweeters. Twitter is tremendously useful tool for getting to know somebody. I can scroll through somebody’s timeline and get a pretty good glimpse of what they care about. If both parties use Twitter often, this makes sense. If one or the other isn’t on Twitter – then linking to Twitter is useless.

(This also works in reverse – if I see you’re a giant a-hole to people on Twitter – I will tell people not to talk to you.)

I get Twitter, but I thought LinkedIn was just for people trying to find jobs?

Sure, that may be true. However, having an updated LinkedIn profile or something I can point people to is helpful. When I’m making an introduction, there is a bit of storytelling involved. Having an updated profile helps me to tell that story.

If you’re lost as to what your LinkedIn profile should look like – just concentrate on the summary. At a minimum, your summary should say what you’re currently doing and what your mission is.

Mission? I don’t have a mission?

Sure you do. Why do you do what you do? What makes you get up in the morning? What makes you the bad ass that you are? If you’re not doing what you want to be doing – write the summary to describe what you’d like to be doing. You may not be in the position you want to be yet – but the operative word there is yet. I’m a big believer that people are in constant motion.  People change jobs all the time. However, people who have a *mission* can carry that through multiple positions.

Ok, I get that – but why am I sending you the ask? Shouldn’t I get a chance to sell it first?

There’s an expression in the Army: “Setting you up for failure.” This is very bad. I don’t want to do that! I want you to include the ask because I want to give the other party to say, “Hey, this is great – but I can’t help you / don’t have time to do this / or (worse case) I think this is stupid.” If that’s the response I get, I don’t want to waste any more time trying to make a connection that isn’t going to happen.

(Sometimes, People will still want to talk even when they don’t think this is a good idea. They’ll want to talk because they *want* to help the idea get better. These people are awesome.)

Why is your intro email so long?

Because I want to deal with all the background stuff on the front end. Ideally, the only thing left to do after the intro email is to set up a phone call/in-person meeting/or simply execute on the action item. If you and the other party have to email back and forth to figure out what’s going on, I haven’t done my job well. Ideally, the response to my email should go like this.

Thanks Christopher! (Moving you to BCC)

Great to meet you. Your idea sounds great. Would you have time for a phone call on Monday at 10:00am?

An email like this means that both parties understand what the other is trying to do and my presence is no longer needed. The “moving you to BCC” also helps because A) I know you responded and B) you’re not going to flood my inbox with logistical things that don’t impact me.

So…. you mentioned that you could make some introductions for me…

Sure, just fill out the “Contact” page in the title bar.